Chris Gordon and Melissa Carpani provide a full range of services in business law, tax law and estate planning. Please review our bios below to learn more about us. We appreciate and look forward to the opportunity of working with our clients. 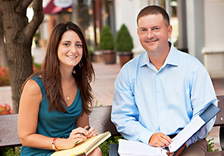 Melissa C. Carpani is a founding member of Carpani and Gordon, P.A. A graduate of the University of Kansas and Loyola University Chicago School of Law, she has been practicing law since graduating from Loyola in 2004. Melissa clerked for Schlagel Gordon & Kinzer, LLC in her final year of law school, joined that firm as an associate in 2004 and was made a member in 2007. In 2010, she joined Chris Gordon in forming Carpani and Gordon, P.A. to create a firm with more emphasis on corporate and tax practice.
MORE >>

Christopher A. Gordon is a founding member of Carpani and Gordon, P.A., and has been in practice since graduating from law school in 1994. Chris has an undergraduate degree in accounting from the University of Missouri-Kansas City, and is a graduate of Washburn University School of Law. While in law school, Chris was a staff member of the Washburn Law Journal and currently continues to write for the Johnson County BarLetter as a regular contributor. Chris holds the highest possible rating granted by Martindale-Hubbell Law Directory as an AV rated attorney.
MORE >>